In the server CPU market AMD scored its best-ever quarter from a market share and sales perspective with demand from hyperscale cloud service providers, and Google in particular, being a big contributing factor to AMD’s strong performance.

Full year server revenue is on track to grow 11 percent, reaching $92 billion. The strong revenue growth is boosted by a steady increase in server prices. Omdia continues to see servers optimized for compute- and data-intensive workloads like artificial intelligence and analytics take higher share of the annual shipments. These are configured with a pool of co-processors, more memory and faster storage.

Component shortage puts second half of 2021 shipments at risk

There is a dire shortage of some critical components like power management integrated circuits (PMICs) which could impact server shipments, particularly in the backend of the year. Server vendors have increased their component inventory levels to mitigate the shortage and limit the impact of long lead times. This short-term resolution is putting extra strain on the already stressed server component supply chain and is pushing prices up.

“Demands for semiconductors related to power management, have gone up exponentially due to proliferation of smartphones, other personal electronics devices, increasing electronics systems in cars, and Internet of Things devices. Components like PMICs are normally manufactured on an 8-inch wafer to make it competitively priced. Over the last many years there was no significant investment in 8-inch fab capacity as it was considered a low margin business. This makes it difficult to solve the supply shortage issue in the short term,” said Manoj Sukumaran, principal analyst, data center computing and networking, at Omdia. “As the supply shortage worsened this year, some companies started investing in 8-inch capacity, but considering that capacity expansion takes at least a year to be productive, it is likely that the PMIC shortage will continue until next year.”

The semiconductor wars are in full swing

Alongside AMD’s success in the server CPU market, Intel signaled it will take a new approach to CPU architecture, introducing new designs for an efficient and a performance core. The former would enable throughput efficiency and multitasking with the low voltage operation creating headroom to increase frequency and scale up performance for more demanding workloads. The performance-core design appropriately targets single-threaded application performance. Most importantly, the combination of these new microarchitectures would enable a wider range of customized CPUs that match application requirements.

As the battle of the x86 architectures continues Arm-based CPU vendors have been making great progress in penetrating the servers of the hyperscale cloud service providers. Although Graviton deployments at AWS somewhat slowed down in 2Q20, Oracle’s deployments of servers with Ampere’s CPU ramped. We also saw good momentum for Fujitsu and Huawei’s Arm-based CPUs.

The group of White Box Vendors, including Wiwynn, QCT (Quanta), Tyan (MiTAC), and Ingrasys (Foxconn), continued to lead the market as hyperscale cloud service providers remained steadfast in their expansion. All North American hyperscale cloud service providers increased their purchasing quarter-over-quarter with Microsoft, Amazon and Apple being particularly active. As a result, White Box Vendors gained market shares in the quarter, maintaining their lead with a 26% revenue market share.

Omdia found an interesting development in the quarter was Inspur almost beating HPE from a server shipments perspective. The US vendor shipped just nine thousand more servers than Inspur. From a revenue perspective, though, HPE had a solid quarter with strong growth in high-performance compute and mission-critical deals. In fact, HPE indicated that their order books for high performance computing business now exceed $2.5 billion. 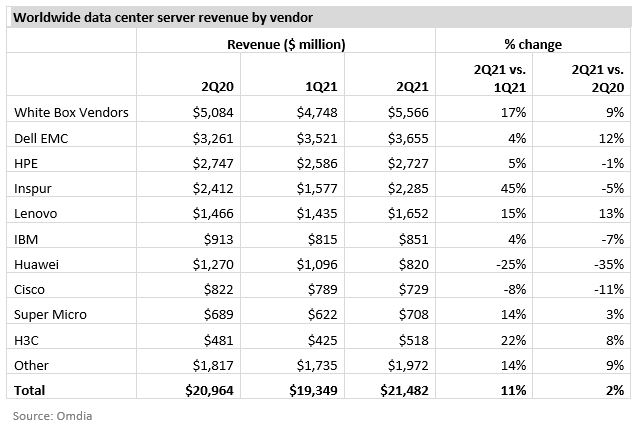 “We’ve tracked the evolution of technology consumption models for many years and were not surprised by the renewed efforts of server vendors to provide their infrastructure as a service, albeit located at the premises of their customers,” said Vlad Galabov, director, cloud and data center research, at Omdia. “In the second quarter of 2021 HPE, Dell and Lenovo all reported strong traction for their individual offerings. Interestingly, HPE also delivered than a supercomputer as a service. This is in line with a broader trend we see at large enterprises for lowering capital expenditure in favor of higher operating expenses.”