LONDON, 25 February, 2022 – Samsung's Galaxy A12 topped the list of 10 most shipped smartphones last year overtaking Apple, according to Omdia’s 4Q21 smartphone model market tracker. Apple, which has far fewer models than its competitors, had consistently ranked first, second, and high until now.

Since Samsung's Galaxy A12 was first released in the fourth quarter of 2020, quarterly shipments from 2021 have exceeded 10 million units all the way, except for the second quarter, when Samsung experienced a production shortage due to the re-spread of Covid-19 in India and Vietnam. On an annual basis, it recorded a total of 51.8 million units in 2021. This is Samsung's first model to have exceeded 50 million in a year with a single model and ranked first in terms of shipments among more than 1,000 smartphone models shipped worldwide.

As competition with Chinese companies intensifies, Samsung has been strengthening its mid and low-end lineup, and from 2019, the low-series J series was integrated with the A series. At the same time, Samsung has been steadily expanding the adoption of multi-cameras in its A series models and adding features that consumers prefer.

“Although the average selling price of Apple’s iPhones, which are included in the top 10, is 5 times higher than Galaxy A12, it is the most efficient model from Samsung, shipping more than 50 million units per year as a single model.” said Jusy Hong, Senior Research Manager at Omdia.

The iPhone 13, which Apple released this year, has the second cheapest model after iPhone 13 mini. The lowest price start with 128GB of memory, at an unlocked price of $829, which is the same as the price of the iPhone 12 64GB released last year. However, the overall average selling price of 13 has risen compared to last year due to the release of a model with higher memory capacity. Despite the rise in selling price, iPhone 13 shipments recorded 34.9 million units, an increase of more than 100,000 units from last year's iPhone 12's 23.3 million units.

The model that took fifth place is Xiaomi's Redmi 9A. Xiaomi shipped a total of 26.8M Redmi 9A units, and the average selling price of the model was $78 per year. This is 1/10 of Apple's iPhone models ranked at the top in shipments.

Apple's iPhones again took the 6th to 9th places, and shipments of the Pro model increased significantly. Although the average selling price of the Pro model far exceeded $1,000, shipments well exceeded 20 million units. Apple's total annual shipments last year recorded 234.5 million units, of which 39% were models with an average selling price of more than $1,000. This is the highest percentage in Apple's history.

“Apple's dominance in the premium market is getting stronger, as consumers' demand for premium smartphones has increased as the pandemic situation has eased”, said Hong.

The last place in the top 10 is taken by Samsung's Galaxy A02. A total of 18.3 million units were shipped last year. It is the second cheapest model after the Xiaomi Redmi 9A in the top 10.

In the top 10, Apple included a total of seven models, Samsung two and Xiaomi one model. Compared to last year, Apple added two more models, while Samsung had two fewer models. Same as last year, Xiaomi put one model in the top 10 but the ranking rose from 9th place last year, to 5th this year. 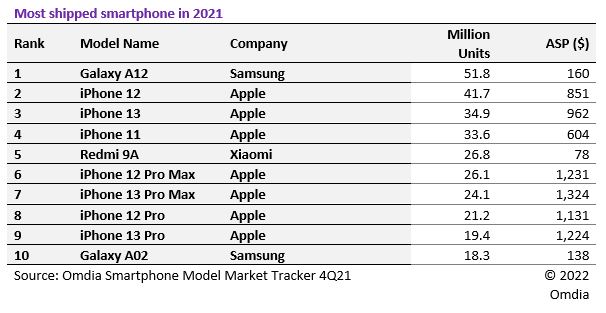