LONDON, 29 July, 2022 – According to Omdia's smartphone preliminary shipment report for the second quarter of 2022, global smartphone shipments totaled 293.7 million units, a decrease of 3.2% compared to the same period last year – and a 4.6% decrease compared to the previous quarter. Although the growth rate from the same period of the previous year was significantly reduced from 13% in the first quarter, shipments decreased to 601.4 million units in the first half as the negative growth trend was maintained for two consecutive quarters. In particular, shipments of major set OEMs in China recorded double-digit negative growth in 2022, compared to the previous year, leading to a decline in global shipments.

Samsung took first place, with shipments of 62.2 million smartphones in the second quarter, followed by Apple, which shipped 48.9 million units. The shipments of these two companies increased by 8.7% and 12.9%, respectively, compared to the previous year. “The increase in Samsung's shipments is thanks to strong sales of low-end models, such as the Galaxy A13, and its flagship Galaxy S22 series. There were also no special issues in production and parts supply this year, unlike the significant decrease in shipments due to the lack of components supply and the lockdown of major production bases during the pandemic in the second quarter of last year”, said Jusy Hong, Senior Research Manager at Omdia.

Continuing to excel in the premium market, Apple has shipped 48.9 million units. Apple's market share fell from 18.3% in the first quarter to 16.6% in the second quarter this year, but it increased by 2.3 percentage points from 14.3% in the second quarter of last year. Demand for the iPhone 13 series continues to be strong compared to its predecessor, the 12 series. Apple's consumers, who are particularly loyal and high-income customers, are relatively less affected by the economic downturn than mid-range brands. Apple's iPhone shipments have continued to grow for the seventh quarter in a row, from the fourth quarter of 2020.

On the other hand, the sluggishness of major Chinese OEMs continues. In particular, the year-on-year growth of Xiaomi, Oppo, and Vivo, which ranked third to fifth in shipments, all recorded a decline of more than 20% in the second quarter as in the first quarter. Contributing factors to the decline are the continued slump in the Chinese domestic smartphone market and increasingly intense competition with Honor, which is experiencing rapid growth in the domestic market.
Xiaomi shipped 39.4 million units in the second quarter, notably falling below 40 million. Oppo and Vivo shipments increased slightly quarter-on-quarter but were still down 20.9% and 21.5%, respectively compared to the same period last year. This is indicative of the problems Xiaomi and Oppo have experienced with a shortage of components last year and significantly increased their purchases to secure parts. Shipments of major Chinese companies decreased this year due to the pandemic-related lockdown of major Chinese cities, the Russia-Ukraine war, and the subsequent economic downturn. This has resulted in a significant increase in inventory with OEMs continuing to downgrade their shipment target for this year and reduce component purchases.

Honor is steadily increasing its shipments, even if it is far short of the initially expected quantity. Honor's shipments in the second quarter totaled 15.1 million units – steady since the fourth quarter of last year. As Honor is still focusing on the Chinese domestic market, their shipment increase has resulted in decreased shipments of others, such as Xiaomi, Oppo and Vivo.

Realme took 7th place, with shipments falling by 8% year-on-year in the second quarter, the first decline after a steady increase since the third quarter of 2020. The main reasons for this are intensified competition among companies and reduced demand in China domestic and Asia, which are major markets of Realme. In 2021, Realme smartphone shipments nearly reached 60 million, but with weak demand in Chinese and European markets, Realme is also facing the problem on inventory increasing, as such Realme shipments are likely to decrease further in the second half of this year.

Motorola, in 8th place, is still enjoying the effect of LG's smartphone withdrawal from the US and Latin America. Tecno is in 9th place with shipments of 8.7 million units. Together, Motorola and Tecno grew 19.8% and 22.5%, respectively from the previous year.

Reducing inventory has become a key theme in the global smartphone market in 2022, not just with smartphone sets, but also key components supply.

Hong concludes: “In the second half of the year, due to negative factors such as the global economic slowdown, inflation, and a strong dollar, OEMs' shipment targets for this year are being revised downward. Most OEMs are rapidly reducing the purchase volume of major parts due to concerns about weak demand in the second half – not just those with high inventories from the first half. Overall, total smartphone shipments this year are expected to be lower than initially expected.” 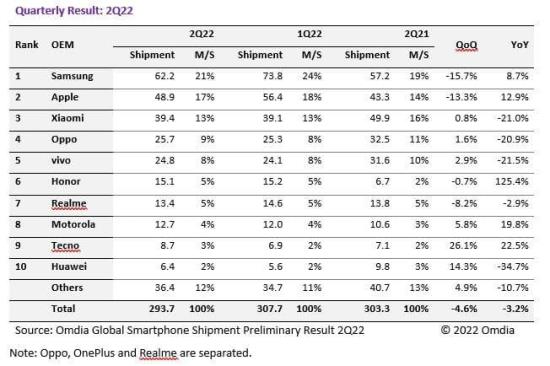