The market is ripe for RPA and intelligent automation as the pandemic carries on and the world acclimates to and invests in this new normal, positioning all vendors in this space for strong growth trajectories. In this short piece, Omdia reviews highlights from recent earnings announcements by the two publicly traded RPA vendors, Blue Prism and UiPath, and provides comparative and competitive context.

Blue Prism, the only publicly traded RPA pureplay until very recently, had another period of strong growth. The UK-based vendor announces financial results each half year, most recently reporting revenue of £80.4 million in 1H21, up 21% from 1H20 (see Figure 1), driven by 65% growth in Blue Prism Cloud bookings and reflecting continued successes with new and existing customers despite the changes brought on by the COVID-19 pandemic. Bookings for the period reached £98 million (up 35% from 1H20) and the vendor has onboarded nearly 200 new customers since the close of 1H20 during the pandemic.

Looking ahead to the close of the current period, Blue Prism is anticipating FY2021 revenue to reach the lower end of the £170–180 million range that was provided as guidance previously, meaning 2H21 revenue could reach the £90–100 million range. This would result in year-over-year growth of 27% in 2H21, give or take. The vendor, at its Blue Prism World virtual event in May 2021, announced several portfolio updates, notably Blue Prism Version 7, partnerships, and executive appointments each intended to bolster its position in the increasingly lucrative yet competitive landscape. Should the company be able to meet or exceed the higher end of this guidance range, it would nearly reach or cross over the notable milestone of £100 million in a half year period.

In its first earnings call ever after its IPO on April 21, 2021, UiPath announced strong revenue growth and sales successes with both new and existing customers. The company has added 2,400 new customers in the last year, bringing the total to over 8,500. But more importantly, this underscores the vendor’s progress amidst the global COVID-19 pandemic and the resulting changes brought about for the vendor and its customers alike.

On February 1, 2021, UiPath received its largest funding round to date of $750 million, less than three months ahead of its IPO. Moreover, in March, the company acquired Cloud Elements to expand its API capabilities, both significant events leading up to the IPO, all within this first quarter. UiPath reported revenue of $186 million for the quarter ended April 30, 2021 (FY 1Q22), growing nearly 65% year-over-year (see Figure 2). 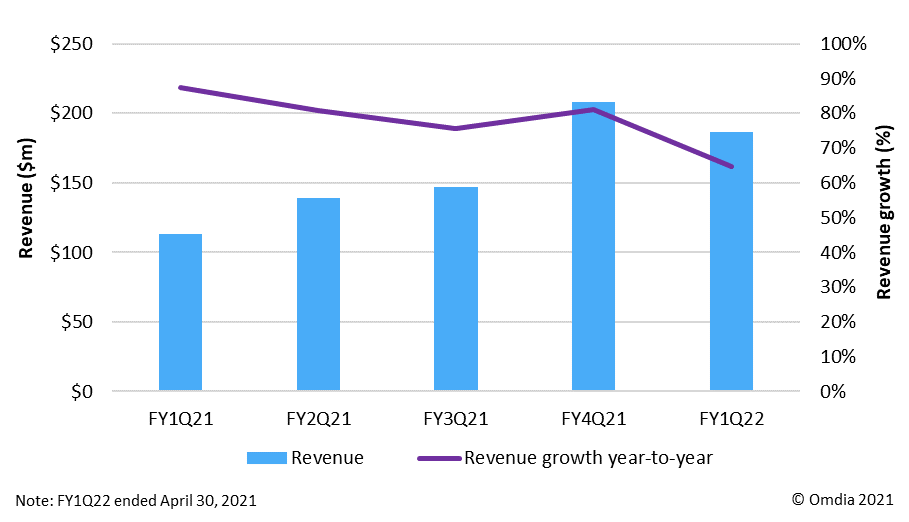 Since the close of the quarter, UiPath announced UiPath Platform 21.4 in May that includes new features such as UiPath Insights available in Automation Cloud, Task Mining, and Automation Ops. New and enhanced product features, tuck-in acquisitions, and a growing list of strategic partners will help the company maintain its momentum in the RPA and intelligent automation space. The company provided guidance for the current quarter (FY 2Q22) where it expects quarterly revenue in the range of $180–185 million, which would generate year-over-year revenue growth of approximately 30%.

Regarding operating profitability, however, the vendor took a bigger than usual hit during the quarter. The vendor touted hiring in its sales and customer success teams to meet customer demand as an area of note while also incurring sizable stock-based compensation charges related to its IPO, both of which negatively impacted operating profitability. In contrast, the company had turned to operating profit in the previous quarter for the first time, a notable feat for a company of its age, growth, and subscription revenue mix.

UiPath is taking share faster than its peers, growing 80% year-over-year from 2019 to 2020 compared to Automation Anywhere and Blue Prism’s growth of 51% and 46%, respectively, over the same period. Notably, this higher growth rate is also based off of its larger revenue base, underscoring the vendor’s growing dominance in the space.

Figure 3 shows Blue Prism and UiPath financial metrics on a comparable basis, both in US dollars and for the same six-month periods. Of note, for the most recent six-month period, UiPath’s revenue base grew to nearly four times that of Blue Prism. This could speak to many factors such as the vendors’ regional breakouts and the difference in appetite and readiness for RPA and intelligent automation between EMEA and North America in particular. Blue Prism has been a publicly traded company for just over 5 years longer than UiPath has and thus has needed to mind its investments and business spend more carefully than previously privately held UiPath. As a publicly traded company now, UiPath will also face pressures from its investor community not previously seen which could be an adjustment for the vendor. Moreover, there is chatter about the potential of an IPO by peer and also fast-growing competitor Automation Anywhere in the near future, something that could impact both vendors.

With coverage areas including robotic process automation (RPA), intelligent automation, and AI, Cassandra produces thought-provoking research for vendor, service provider, and enterprise clients. Although she roots her analysis in data, Cassandra provides value-added insight to translate the data into what it means for these clients.

Cassandra joined Omdia (formerly Ovum) in 2019, having spent the 10 years prior in technology and market research at Technology Business Research, Inc. (TBR). At TBR, Cassandra covered topics including the all-encompassing cloud, professional services, hybrid IT, and enterprise software. She led end-user research and spearheaded many reports, benchmarks, and market forecasts.

Analyst Commentary: UiPath sets the stage for IPO in a busy March

UiPath brings on Cloud Elements to grow its low-code, AI-based automation capabilities ahead of its upcoming IPO.

In this piece, Omdia discusses recent study findings that highlight the increasing importance of intelligent automation among enterprises as well as how vendors are responding.