LONDON, 16 February, 2022 – New research from market analyst firm Omdia shows that Apple’s advertising business is now worth over $3.7bn per year, having grown by 238% in 2021 compared to 2020. The data and analysis comes from Omdia’s latest report, Apple and Advertising, part of the research firm’s Advertising Intelligence Service, which provides net advertising revenue forecasts split by media, company, and format for 67 individual countries, plus global regions.

Apple’s explosive advertising revenue growth comes against the backdrop of an upended advertising ecosystem on iOS following changes the company implemented as part of its iOS 14.5 rollout in April 2021. Specifically, Apple changed the way in which its Identifier for Advertisers (IDFA) can be accessed and used by app publishers and, by extension, ad networks and ad tech vendors. The changes come under Apple’s new AppTrackingTransparency (ATT) policy, designed to give users more control over how their data is tracked, used, and shared. Crucially, IDFA access for all third-party app publishers was switched off by default in iOS 14.5, meaning that a user now must actively opt in to tracking before their IDFA can be used for tracking purposes. The move has had a significant impact on the market, mandating a greater emphasis on new approaches to identity resolution on iOS and, at the same time, increasing the appeal of Apple’s own Search Ads advertising offering to app publishers looking to acquire users within its ecosystem.

Matthew Bailey, Principal Analyst at Omdia, commented: “Whether intentional or not, Apple’s Search Ads business has benefited significantly from the implementation of ATT, posting year-on-year growth of 264% in calendar year 2021 to surpass $3.5bn in revenue.” Even so, Apple’s influence over the advertising ecosystem is highly amplified compared to its share of overall advertising revenue.

Bailey continued: “Despite dynamic growth, Apple is still a tiny player in the ad market, taking just 0.7% of global online advertising revenue in 2021. Meanwhile, big tech competitors Google and Meta enjoyed respective shares of 28% and 21% last year. Indeed, although seeing a boost following the implementation of ATT, Apple’s ad business still accounts for under 1% of the company’s total revenue, which remains dominated by device sales.” 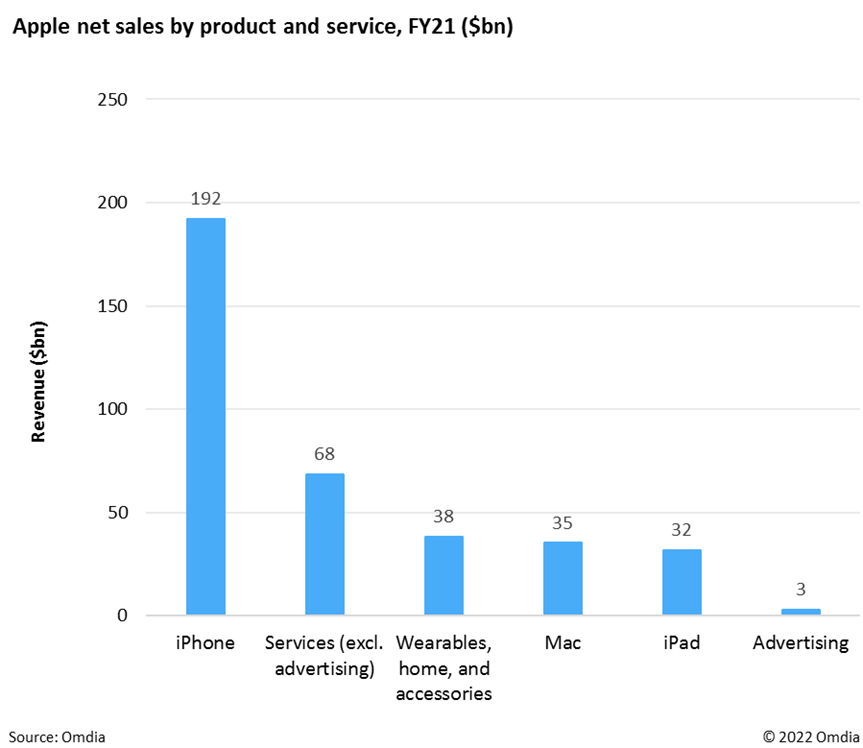 Indeed, a key finding of the research is that Apple’s ATT changes are primarily a bid to bolster its core devices business, and that advertising will remain a small, but growing, opportunity for Apple over the coming years. Bailey concludes: “Apple has expanded its presence in advertising as it seeks to diversify its revenue streams and, although Apple will move further into the advertising space over the coming years, it will do so carefully. Maintaining its premium reputation will be of key concern for the company, so Apple’s ad operations will be restricted to ads that are both useful and respectful to the Apple user experience. For this reason, we do not expect Apple’s ad business to truly threaten that of its big tech peers Google, Meta, or Amazon any time soon.”